"Sustainability is not a question of ethics, it's one of
physics. When something is unsustainable, it stops.
The way we're consuming is unsustainable. It will
stop. The way it's been has come to the end."
SOME SMART, ANONYMOUS PERSON

"Everything I buy is vintage."
LUCY LIU

"Buy less, choose well, and mix it all."
VIVIENNE WESTWOOD

"Vintage is not only glorious and stylish, it's also the way forward in terms of recycling. Whenever I go into great vintage stores, I wonder why we ever buy new things."
ACTRESS THANDIE NEWTON

Recycling is what we do when we're out of options to avoid, repair, or reuse the product first. Firstly: Reduce. Don't buy what we don't need. Repair: Fix stuff that still has life in it. Reuse: Share. Then, only when you've exhausted those options, recycle.
ANNIE LEONARD, AUTHOR OF THE STORY OF STUFF

" Access is better than ownership" Ben Hammersley, Editor-at-large, Wired Magazine, UK on the next big thing in technology breakthroughs

"Consumers have not been told effectively enough that they have huge power and that purchasing and shopping involve a moral choice."
ANITA RODDICK, BODY SHOP FOUNDER

"Too many people spend money they haven’t earned, to buy things they don’t want, to impress people they don’t like."
WILL ROGERS

"Wear a towel instead of a coat, it's very chic. Or your husband’s boxer shorts with a belt, or something from your grandmother. It's all about do-it-yourself.”
VIVIENNE WESTWOOD at the New Economics Forum in November 2011.

"There's this idea that somehow you’ve got to keep changing things, and as often as possible. Maybe if people just decided not to buy anything for a while, they’d get a chance to think about what they wanted; what they really liked…."

"People used to die of consumption. Then it went from being a fatal disease to a way of life"
ANON

"Advertising has us chasing cars and clothes, working jobs we hate so we can buy shit we don’t need."
FIGHT CLUB, MOVIE BASED ON THE NOVEL BY CHUCK PALAHNIUK

"The gap in our economy is between what we have and what we think we ought to have - and that is a moral problem, not an economic one."
PAUL HEYNE

"God forbid that India should ever take to industrialism after the manner of the west... keeping the world in chains.  If [our nation] took to similar economic exploitation, it would strip the world bare like locusts."
MAHATMA GANDHI

"You have succeeded in life when all you really want is only what you really need."
VERNON HOWARD

"I still prefer to buy vintage over spending it all on one designer piece."
CHLOE SEVIGNY

"Our world has enough for each person’s need, but not for his greed."
MOHANDAS GANDHI

The finest clothing made is a person’s skin, but, of course, society demands something more than this.
MARK TWAIN

Women usually love what they buy, yet hate two-thirds of what is in their closets.
MIGNON MCLAUGHLIN, THE NEUROTIC’S NOTEBOOK, 1960

Copyright © 2022 Buy Nothing New. All Rights Reserved | Contact Us
Site by Sakari Design 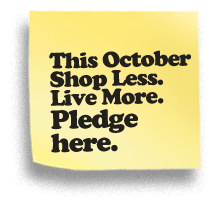